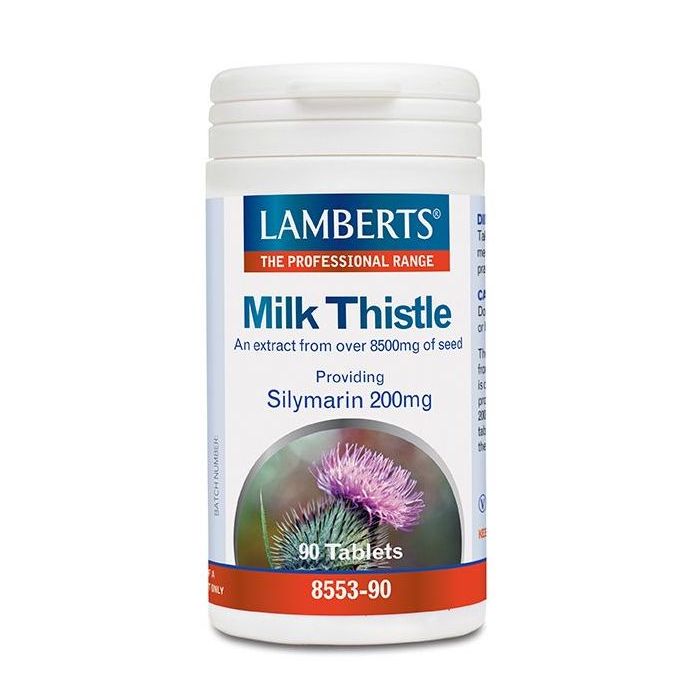 Skip to the beginning of the images gallery

Tags:
Lamberts Blood circulation Quitting smoking and other addictions Detoxification Digestive Diuretic Liver Medicinal herbs Milk thistle
Lamberts Milk Thistle (Silymarin) is a traditional herbal medicinal product used to relieve the symptoms associated with occasional over indulgence of food and drink such as indigestion and upset stomach.
Silymarin is the active principle from the fruit of Silybum marianum, better known as milk thistle, a plant that grows throughout the Mediterranean and naturalised in the UK since herbalists introduced it in the 16th century.
Milk thistle is one of the most extensively studied herbs in use today, with over 300 scientific studies on its chemistry and application. We use a standardised extract from mature seeds, to give a guaranteed level of 200mg silymarin per tablet.
Price
€29.95
Choose your Saving Pack
x1
/u
x2
/u
x3
/u
x4
/u

Product Name
Lamberts Milk Thistle 90 tablets
Active ingredient
Milk Thistle
Administration
Oral
How to use
Take 1 to 2 tablets per day as required. Swallow the tablets whole with some water or other liquid. Do not chew the tablets.
Type
tablets
Composition
Each tablet delivers:
· Milk Thistle fruits (Silybum marianum (L.) Gaertner) (286mg 30:1 extract) 8.580mg
providing Silymarin 200mg
Precautions
Do not give to children or adolescents under 18 years old

VEGAN
VEGGIE
GLUTEN FREE
LACTOSE FREE
warnings:
Food supplements should not be used as substitutes for a balanced diet and a healthy lifestyle. Keep out of reach of younger children. Do not exceed the daily dose expressly recommended. This product is not designed to diagnose, treat or prevent any disease. Once opened keep in a cool and dry place.
OFERTAS
Copyright © Official Store Suplments. All rights reserved