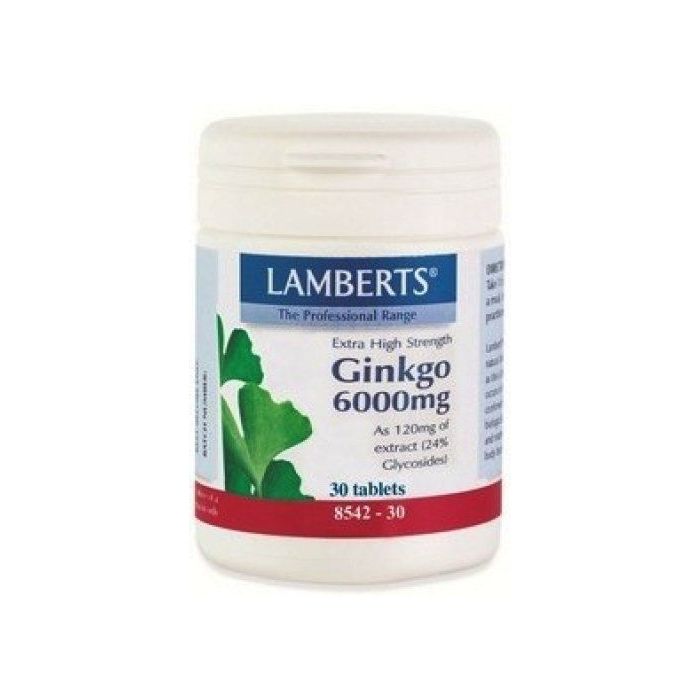 Skip to the beginning of the images gallery

Notify me when this product is in stock
Tags:
Lamberts Antiaging Cardiovascular Blood circulation Memory Migraines Ear Eyes and vision Medicinal herbs Ginkgo Biloba
Lamberts Ginkgo 6000mg is a high Strength one-a-day, time release formula.
Each tablet contains 120mg extract, equivalent to 6000mg of dried leaf. The tablets are time release so that the ginkgo is released gradually over a period of approximately 2 hours. This will help prevent any minor side effects, such as mild, short-term headaches.
Most of the studies on Ginkgo biloba have been carried out with a standardised extract called GBE, containing 24% glycosides, and this is the material used in this Lamberts® product. Lamberts also insist on a high purity extract that has guaranteed low levels of an unwanted natural compound called ginkgolic acid.
Ginkgo biloba is still one of the most popular herbs in the world, with millions of people using it throughout Europe and North America.
Price
€14.95
Choose your Saving Pack
x1
/u
x2
/u
x3
/u
x4
/u

VEGAN
VEGGIE
GLUTEN FREE
LACTOSE FREE
warnings:
Food supplements should not be used as substitutes for a balanced diet and a healthy lifestyle. Keep out of reach of younger children. Do not exceed the daily dose expressly recommended. This product is not designed to diagnose, treat or prevent any disease. Once opened keep in a cool and dry place.
OFERTAS
Copyright © Official Store Suplments. All rights reserved